New item: Globes! Check it out

How was your New Year’s? I have to say we had one of the best New Year’s ever this year. The week leading up to it was good, too. We had family over for a late Christmas dinner, we met some dear friends for a night out (and then went back to their house to play Mexican Train – have you ever played this game? So fun!), and then we had lunch with hubby’s family New Year’s Eve day. We had such a great week, but we were really looking forward to our New Year’s celebration.

When my hubby and I were dating, we decided to forgo amateur night and stay in and watch movies. We made lobster and steak, and had a really nice, romantic evening. We talked about our year, what we did, the silly things that made us laugh, and what we wanted to do going forward in the new year. It felt like the perfect finish to one year and start of the next.

Except for a few years, we’ve continued to do the same thing. It’s something we really cherish. A few months ago we decided to have a theme movie night of some sort. In the past, we’ve watched silly movies or animated flicks, but this time we started talking about which movies we’ve always wanted to see and yet for some reason haven’t. We settled on Casablanca

I have to say that Casablanca really held up. I loved the characters, the writing, it was all fab. We watched that one first and then Maltese Falcon. Maybe if we had watched Maltese Falcon first we would have liked it more, but after Casablanca it was a bit of a letdown.

. I’ve made these in the past and they are really easy to prepare and go really well with a glass of champagne. We also had shrimp, brie, and rumaki. For dessert I made a fruit tart recipe that DH really likes. It’s not my favorite dish, but can I ever say no to him?

We had a lovely night, snuggled up on the couch. Ah….

She teaches the art of mixed media in classes and online ecourses. 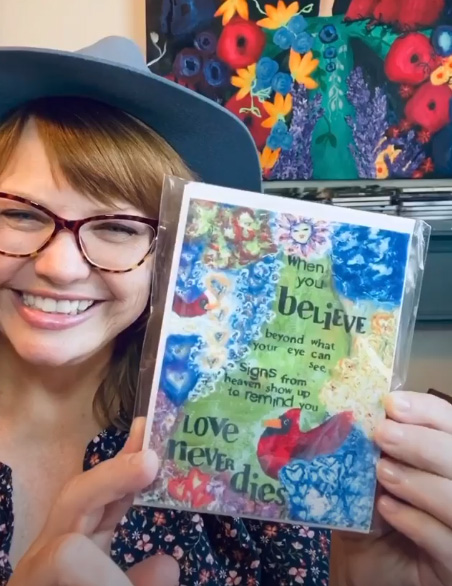 My new poetry book Belonging explores the ups and

Typical painting for me... working with inks, acry

“You keep track of all my sorrows. You have coll

Dropped off art for an upcoming exhibition at the

Hey ya'll... have a great Friday. Here I am hangin

NEW item: garden flags! Add a colorful touch to yo